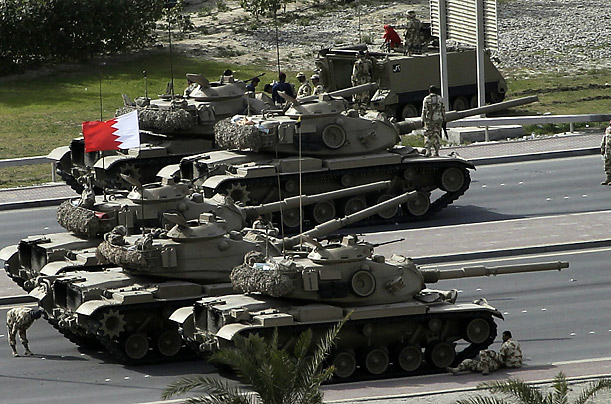 The UK Foreign Office (FCO) has urged Britons to leave Bahrain on Thursday, amid protests and violence there.

The FCO advised UK nationals without a "pressing reason" to stay to leave via the international airport on 17 March on commercial or UK-chartered flights.

The FCO said it would charter planes to Dubai, to help supplement the number of commercial flights available.

Security forces with tanks have moved in on anti-government protesters, in the Gulf state's capital Manama.

The protesters have been camped in a square in the city for weeks.

Troops have taken over a hospital treating the wounded. Officials have imposed a curfew and banned protests.

The country's Sunni rulers on Tuesday called in Saudi troops to keep order.

Bahrain's health minister, himself a Shia, has resigned in protest against the government's use of force, and the BBC's Caroline Hawley in Manama says Shia judges have resigned en masse.

Dubai flights
Bahrain - which has a population of 800,000 and is home to the US Navy's Fifth Fleet - is the first Gulf country to be thrown into turmoil by the wave of unrest sweeping the Arab world. Protests there began last month.

The UK Foreign Office said that British nationals should "stay at home overnight" on Wednesday into Thursday, adding that it would update its travel advice before 0600 Bahrain time (0300 GMT) on 17 March.

It said the first option should be commercial routes, which were operating normally.

The UK government is chartering planes to get people as far as Dubai if necessary, for which travellers will be charged £260 each.