Our world is cracking open!

Our world is cracking open!

I posted about the large crack across Africa a while ago now but it seems these huge cracks are appearing all over the world.


Large Crack Opens in the Earth in Southern Peru
[youtube][/youtube]


The sudden appearance early in the morning of an enormous crack, measuring 100 meters wide and three kilometers long, caused confusion among residents of the Huacullani district in the Chucuito province, department of Puno.

The exact cause of the crack in the earth still unknown. Peru's geophysical institute ruled out the occurrence of an earthquake in the region, but what is clear is that the ground opened up and large blocks of earth can be observed scattered throughout the area.

Eventually it could reach the east coast of Ethiopia and fill up with seawater. "At some point, if that spreading and rifting continues, then that area will be flooded," says Ken Macdonald, a marine geophysicist at the University of California, Santa Barbara, who was not involved with the study.

Icelanders are accustomed to their land being stretched, split, and torn by violent earthquakes and haphazardly rebuilt by exploding volcanoes. But everyone was surprised when a large lake began to disappear into a long fissure created by one of last summer's earthquakes.

The draining lake is an oddity even by Icelandic standards, and has lured hordes of curious onlookers to it barren shores.

"If you put your ear to the ground, you can hear the lake draining," said geologist Amy Clifton of the Nordic Volcanological Institute in Reykjavik, Iceland. "It sounds like water going down the sink."

Last year, during a leisurely Sunday drive, a geologist noticed a large gash in the landscape about 20 kilometers (13 miles) from Reykjavik and reported it to Clifton. When she arrived she found a fissure—about a foot wide and 400 meters (1,280 feet) long—that led directly into Lake Kleifarvatn and disappeared beneath the water.

Kleifarvatn is draining at about one centimeter (one-third of an inch) a day, according to Clifton. "You can almost see the lake level drop," she said.

Summerhouses that were once mere steps from waterfront are now more than a kilometer away from the water's edge. The placid waters have dropped more than four meters in the last year. In their place is a barren lake bed speckled with sulphur-rimmed thermal springs that spit boiling water and mud.

Clifton spends much of her time mapping and measuring "rips, gashes, and holes" in the Icelandic landscape. Describing herself as a "walking pencil," because her treks are all mapped by global positioning system (GPS) technology, she investigates open cracks, torn vegetation, rock falls, sinkholes, and other disturbances and tries to determine what caused them.

But what phenomenon created the large fissure at Lake Kleifarvatn is an enigma. "I couldn't find an earthquake in our database that was big enough to cause such a huge rupture in the surface," said Clifton.

She and some of her colleagues think a "quiet earthquake" may be responsible. Explaining such a scenario, Clifton said the water may have "lubricated the fault lines, allowing them to slide quietly and slowly, preventing the shock waves that would normally accompany an earthquake."

The earthquake thought to be responsible for the fissure at Lake Kleifarvatn occurred last year on June 17, about 80 kilometers (49 miles) east in the South Icelandic seismic zone. "No one ever expected earthquakes in this region to affect the surface in the Reykjanes Peninsula, where Lake Kleifarvatn is located," said Clifton.

Clifton hopes to eventually understand the relationship between the movement of faults deep within Earth and their surface effects in the region. Such knowledge is important for mapping areas that may be subject to future hazards, especially in regions where the population is growing. 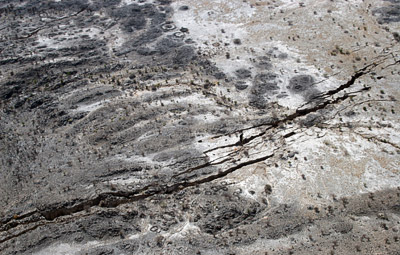 Aerial photo of the cracks and faults that formed above the zone where molten rock rose into the plate, reaching to within approximately 2 kilometres of the surface.


Deepest cracks of Earth give clues to life in space 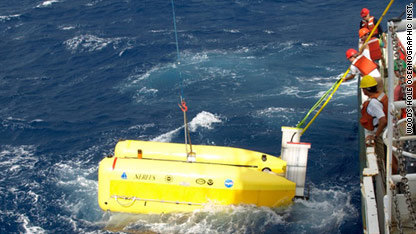 Scientists have discovered the deepest crack on the Earth’s crust on the Caribbean Sea floor, along with signs of life that at that those crushing depths could mean alien life could exist on other planets, NASA said.

A NASA-funded team discovered three hydrothermal vents - fissures in a planet's surface from which geothermally heated water comes – including one about 16,000 feet under the sea along a 100-kilometer (62-mile) stretch called the Mid-Cayman Rise. That stretch of sea bed is an ultra-slow spreading ridge that is part of the tectonic boundary between the North American and Caribbean plates.

Though these hydrothermal vents are far from sunlight and under the extreme pressures of the oceans, some of them get as hot as a convection oven, and scientists say they host bizarre communities that could lead to clues about how life may exist on other planets.

“Most life on Earth is sustained by food chains that begin with sunlight as their energy source. That’s not an option for possible life deep in the ocean of Jupiter’s icy moon Europa, prioritized by NASA for future exploration,” said Max Coleman, co-author of the study with NASA’s jet propulsion laboratory.

“However, organisms around the deep vents get energy from the chemicals in hydrothermal fluid, a scenario we think is similar to the seafloor of Europa, and this work will help us understand what we might find when we search for life there.”

(Colombo-Lankapuvath) Public in the Kuchchaweli, Trincomalee are warned to not to reach the area where the earth is cracked. National Building Research Organization (NBRO) Official R.M.S Bandara said there was no need to panic over the cracks, but public should refrain from reaching the area as the soil of the particular area is sinking.

He further said that according to the determination of the research team, pressure that mounted due to the under ground saturation of water in its sand layer has caused the cracks.

During investigations people in the Kuchchaweli area have reported to officials that earlier there has been an abandon canal in close proximity to the cracked line. Therefore, officials predict that the soil may have become smooth with the effect of all the natural forces.


A Crack Opens in the Ethiopian Landscape, Preparing the Way for a New Sea

Two volcanic eruptions shook the desert, and a 35-mile-long rift opened in the land, measuring 20 feet wide in some places. Now a new study adds weight to the argument that the opening of this crack marks the first step in the formation of a new sea that may eventually separate East Africa from the rest of the continent.

Doug Salewsky and Eileen Heider look at a 200-yard long crack in the earth Tuesday on Birch Creek Road in Menominee County. The crack is 2 to 3 feet wide in some places. The trees in back are tipping about 30 degrees and the earth around the crack has rose about 5 feet with other little fissures spreading out from center.


500 foot crack in the earth appears in Michigan, US

A large crack suddenly appeared after what seemed like an earthquake in Menominee Township of Michigan, US. There are a few videos of the crack but this one seems like the best.

Locals or authorities dont know what it is and have also contacted experts that can figure out why such a massive crack appeared.

No one knows if it was a earthquake, volcano or what might be beneath and causing also the earth to lift up at places.

There is no fault line in that area so a fault line theory cannot explain what is happening there.