A teenage girl in north China was walking on a pavement while talking on her mobile phone, when she fell - suddenly, and without warning - into a sinkhole six metres deep.
The fall was captured by security cameras stationed near the sinkhole, and video footage of the girl falling through the pavement has been making its way around the internet. 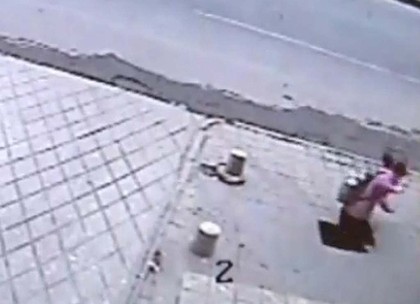 Academic studies have shown that pedestrians are less aware of their environment and more prone to engaging in unsafe behaviour when they are talking on a mobile phone.
The good news: the girl was OK, even if she was shaken.
Wang Wei, a taxi driver who saw the girl fall, jumped out of his cab to climb into the pit to help her.
He told the Telegraph that when he first called out to the girl she did not respond, but after he shook her a bit she came to.
He also said she was shaking and could not stop crying.
As Cathy Cruise, the woman who became famous for falling into a mall fountain while texting, said, the worst part of the fall was her embarrassment.
"The humiliation," she said. "You don't know how many people are laughing at you."