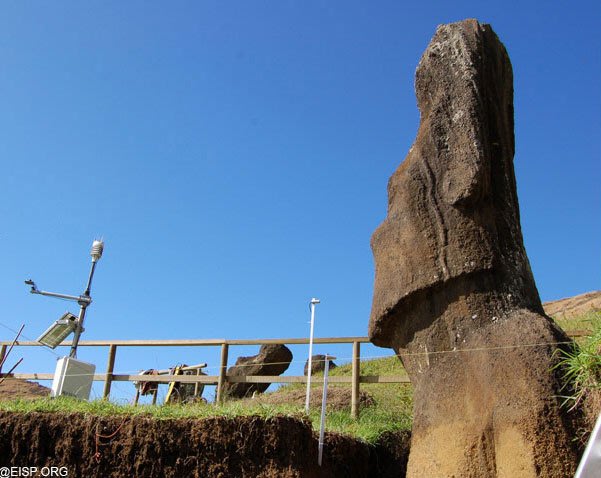 Explorers have long known there was more to the 887 statues on Easter Island—some 2,000 miles west of Chile—than just the statue heads made famous in photographs.

When most people think of the renowned monolithic statues, they think of the heads only. But in October 2011, the Easter Island Statue Project began its Season V expedition, revealing remarkable photos showing that the bodies of the statues go far deeper underground than just about anyone had imagined.
The Thinkbox blog brought the excavation photos to attention today and has sparked some debate online as to whether the evidence of full-bodied statues on Easter Island is really "news." While technically full-bodied statues have been known to exist on Easter Island for hundreds of years, some of the new petroglyph writings on the recently excavated statues appear fairly unique.
As the project's director Jo Anne Van Tilburg, Ph.D, writes:
"While many statues have individual petroglyphs, these and only one other statue—of over 1,000 we have documented—have multiple petroglyphs carved as a composition on their backs. Underlying these carvings is a complex symbol found on less than 100 statues. It is referred to by previous researchers as the "ring and girdle" design, and sometimes said to represent the "sun and rainbow."
Read more here: news.yahoo.com/blogs/sideshow/easter-island-statues-full-bodies-contain-ancient-petroglyphs-235631403.html