A seven-year-old boy in Serbia is attracting worldwide attention after his family claim he is magnetic.
To prove their claim, the family paraded the boy in front of an camera crew, with a variety of objects stuck to his chest.
The boy, called Bogdan, seemed unfazed by the attention - nor did he seem to mind having a variety of cutlery stuck to his body. 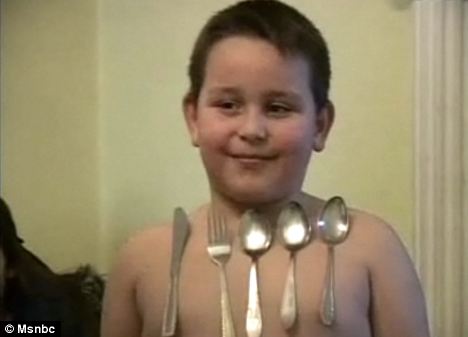 The footage ended up on MSNBC, where reporter Al Stirrett said Bodgan did indeed have a unique ability.
Mr Stirrett told MailOnline that the family did not offer their last name, possibly because of the age of the boy.
Nevertheless, they're happy to show off Bodgan's ability - which they claim he has had since birth.
The footage shows Bogdan first with a variety of cutlery attached to him, then a TV remote control is added to his body. 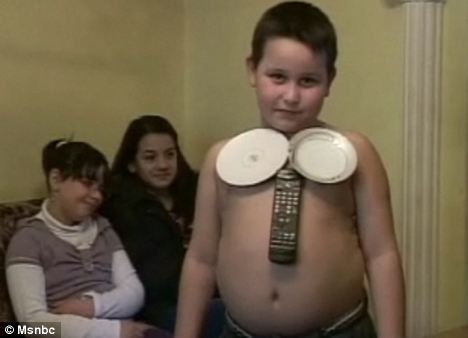 Not just metal: China plates and the TV remote control also stick to Bogdan as other members of his family look on


They say the objects stay there until Bogdan removes them by hand.
Bizarrely, it's not just metal that seems to be attracted to the youngster. China plates and bowls seem to adhere themselves to Bogdan's chest as well.
Any feelings that Bogdan might be nothing more than a sticky little boy are dispelled when a large and heavy frying pan is stuck to his body.
The family say Bogdan is not allowed to go near anything electrical, such as a television or a computer, because his alleged magnetism turns them off.
The good news, however4, is that he will never lose the TV remote control.