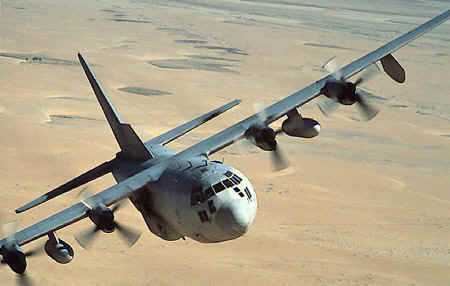 The U.S. military has dispatched one of its secret propaganda planes to the skies around Libya. And that “Commando Solo” aircraft is telling Libyan ships to remain in port – or risk NATO retaliation.

We know this, not because some Pentagon official said so, but because one Dutch radio geek is monitoring the airwaves for information about Operation Odyssey Dawn — and tweeting the surprisingly-detailed results. On Sunday alone, “Huub” has identified the tail numbers, call signs, and movements of dozens of NATO aircraft: Italian fighter jets, American tankers, British aerial spies, U.S. bombers, and the Commando Solo psyops plane (pictured).

“If you attempt to leave port, you will be attacked and destroyed immediately,” the aircraft broadcasted late Sunday night.

It’s the kind of information that the American military typically tries to obscure, at least until a mission is over. But Huub is just a single node in a sprawling online network that trawls the airwaves for clues to military operations.

Huub, also known online as “BlackBox” and @FMCNL, has been monitoring longer than most — more than a quarter-century. A former member of the Dutch military, he says that he’s captured the sounds of everything from Air Force One to CIA rendition flights to the travels of Yugoslavian war criminal Slobodan Mlosevic.

“I just combine the global and free information on the Internet with my local received information from the ether,” Huub e-mails Danger Room. “[My] main goal to listen to this communication is to listen to ‘the truth,’ without any military or political propaganda.”


Military aircraft have to provide basic information about their position over unencrypted, unclassified UHF and VHF radio networks; otherwise, they’d risk slamming into civilian jets in mid-air. That allows savvy listeners like Huub to use radio frequency scanners, amplifiers, and antennas to capture the communications. Some spend thousands of dollars homebrewing their own DIY listening stations. Many others – Huub included – rely on handheld gear, much of which can be ordered through Radio Shack. Huub uses the ICOM R20 receiver and the Uniden UBC-785XLT scanner, both of which retail for a little more than $500.

But the type of gear is almost secondary, Huub writes. “I do not simply listen to ATC [air traffic control] or NATO frequencies,” he says. Instead, he monitors everything from aircraft transponder data to IRC chatrooms to pinpoint his planes. “I use a combination of live listening with local equipment, audio streaming, video streaming, datamining, intelligence, analyzing and the general knowledge of ATC procedures, communication, encryption, call signs, frequencies and a lot of experience on this!”

Huub, who ordinarily spends his days as a digital forensics manager in the town of Hilversum, has lately spent up to 16 hours a day, scanning for clues about the attack on Libya. Some of his Twitter followers aren’t so sure Huub should be devoting that much time to plucking military data from the sky.

“If you are not delaying your tweets by a WIDE margin, you are putting the pilots in harms way!!!!” tweets @Joe_Taxi. “When the sounds of the #operationoddesydawn aircraft are heard in #Libya it should be a complete surprise.”

Huub is hardly the only one eavesdropping on this operation, however. At least two others recorded the Commando Solo in action on Sunday, for instance.

And that shows just how easily average folks can now gather intelligence in ways once reserved for the best-funded spy agencies. Online sleuths now use Google Earth to find everything from North Korea’s launch facilities to Pakistan’s drone bases. Plane-spotters scoured tail numbers to uncover the CIA’s torture flights. So it’s no wonder that the sounds of this newest air war are being broadcast online — even before the planes return to their airstrips.