Web Abuzz over Elenin Comet and Object(s) Following it

Web Abuzz over Elenin Comet and Object(s) Following it 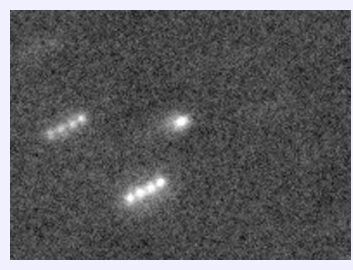 The internet is abuzz over new reports in regards to the Elenin Comet which is headed towards Earth, but more so of what is behind it...

Based on reports published by China's space agency, Sergio Toscano, a director for Astronomical Research in Missions, said that behind the Elenin comet could be an UFO approaching.

"Behind the comet, discovered in December last year, Chinese scientists say there is a phenomenon, something they called cluster, which means globular cluster, or perhaps alien spacecraft," said Toscano.

According to the report quoting the astronomer mission, the space body would be found in the comet's tail and was analyzed after the mysterious signals that came off of an unknown "strange and obscure" formation.

In the words of Toscano, the Chinese have said that the spacecraft is stationed in the same place for ninety days, "before that looked like it was coming from an extraterrestrial civilization," said the Argentine scientist.

According to the Daily Chronicle, this phenomenon was corroborated by Rosie Redfiel, the new director of the Program of NASA's Astrobiology.

"But when NASA began to make calculations and projections of comet's orbit, they realized that something was wrong and the first thing they did was remove the website which provided information on this issue," said Toscano.