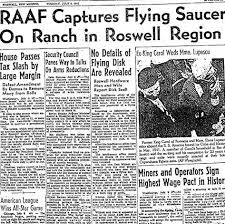 To catch a liar is not easy. Our ability to detect a lie is 50/50. This “no better than chance” ability was improved upon with the advent of the polygraph in the early 1920s. This raised those odds to about 65%, though the polygraph remains “fluky” and the results it produces, controversial. But a new technology has recently emerged that applies software to analyze psycholinguistic cues to indicate truthfulness. This new “lie catcher” software was recently applied to the testimony of a key witness to the Roswell UFO crash in early July of 1947. This witness was Major Jesse Marcel. The new technology confirms that Jesse Marcel had indeed told the truth as a Witness to Roswell.

Two renowned professors at the Stevens Institute of Technology in Hoboken, NJ have recently stunned the criminal psychology and law enforcement communities with the introduction of a computer program offering an astounding 86%-99% rate of success in lie detection. The creators of this “veracity software” are Dr. Raj Chandramouli and Dr. Koduvayur Subbalakshmi. The two (who have established Instream Media, LLC) are now developing partnerships with insurance companies (to detect against false claims) and other businesses where deception often comes in to play. The software developed by the professors is an extraordinary text analytics program.

Dr. Chandrmouli (who graciously provided the software and instructions for use to this author) explains that their approach to deceptive content utilizes a unique combination of statistical analysis, linguistics and psychology. The software combs for 88 psycholinguistic cues that indicate whether an individual is “covering up” or speaking the truth as he or she understands and believes it to be. Traditional polygraphs examine such things as pulse, sweat and respiratory rates to determine veracity. Similarly, “voice stress analysis” has been implemented. But the Stevens Institute scientists (who worked with an interdisciplinary team of linguists, psychologists and information technology engineers) believe that the standard polygraph and voice stress approaches have far too many variables and ‘outside influences’ that can adversely affect the accuracy of those machines and those that operate them.

The professors’ approach is far less open to such variables and influences. They and their team developed an algorithm based upon the Freudian notion that the truth always leaks out no matter how hard we attempt to cover it up- a phenomenon of course known as the “Freudian Slip.”

The technology does not require that an individual be “hooked up” in any way to any kind of machine. In fact, the individual does not even need to be alive to use the deception technology. By carefully and accurately transcribing into text the known and confirmed words of what a person has said on tape or in a video, the Stevens Institute technology is able to scrutinize and interpret their words in text form to determine if they are truthful.