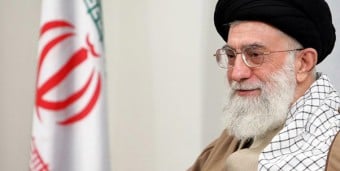 Amid crippling sanctions over its nuclear weapons program, Iran is continuing to prepare itself for war against the West, and now is warning of a coming great event.


“In light of the realization of the divine promise by almighty God, the Zionists and the Great Satan (America) will soon be defeated,” Ayatollah Khamenei, the Iranian supreme leader, is warning.

Khamenei, speaking to hundreds of youths from more than 70 countries attending a world conference on the Arab Spring just days ago, told a cheering crowd in Tehran that “Allah’s promises will be delivered and Islam will be victorious.”

The countries represented included Bahrain, Egypt, Libya and Tunisia, all of which have been involved in the Arab Spring.

In his remarks, Khamenei advised the youths to remain vigilant, stating that the Islamic awakening in the region has delivered several blows to the enemies of Islam and that all Muslims, despite their own historical and social differences, remain united in opposing the “evil hegemony of the Zionists and the Americans.”

Khamenei then claimed the current century as the century of Islam and promised that human history is on the verge of a great event and that soon the world will realize the power of Allah.

Many clerics in Iran have stated that Khamenei is the deputy of the last Islamic messiah on earth and that obedience to him is necessary for the final glorification of Islam.

Khamenei has been heard to say that the coming of the last Islamic Messiah, the Shiites’ 12th Imam Mahdi, is near and that specific actions need to be taken to protect the Islamic regime for upcoming events.

Mahdi, according to Shiite belief, will reappear at the time of Armageddon. Selected forces within the Revolutionary Guards and Basij reportedly have been trained under a task force called “Soldiers of Imam Mahdi” and they will bear the responsibility of security and protecting the regime against uprisings. Many in the Guards and Basij have been told that the 12th Imam is on earth, facilitated the victory of Hezbollah over Israel in the 2006 war and soon will announce publicly his presence after the needed environment is created.

Sources within Vali’eh Amr, the revolutionary forces in charge of the supreme leader’s protection, also recently revealed an assassination attempt on Khamenei that was thwarted just in time.