Why is this not a BIG story?

I'm often amazed at our lack of knowledge about history. Ordinary people are hungry for this information, yet the organizations responsible to disseminate these facts seem to have an agenda to keep us in the dark. This is especially true when it comes to our ancient human history.

I won't hold you in suspense with this article: The Ark of Noah has been found. It's real. I'll describe the evidence in some detail and end with the historical and religious implications.

How it was discovered

In 1959, Turkish army captain Llhan Durupinar discovered an unusual shape while examining aerial photographs of his country. The smooth shape, larger than a football field, stood out from the rough and rocky terrain at an altitude of 6,300 feet near the Turkish border with Iran.

Capt. Durupinar was familiar with the biblical accounts of the Ark and its association with Mount Ararat in Turkey, but he was reluctant to jump to any conclusions. The region was very remote, yet it was inhabited with small villages. No previous reports of an object this odd had been made before. So he forwarded the photographic negative to a famous aerial photography expert named Dr. Brandenburger, at Ohio State University.

Brandenburger was responsible for discovering the Cuban missile bases during the Kennedy era from reconnaissance photos, and after carefully studying the photo, he concluded: "I have no doubt at all, that this object is a ship. In my entire career, I have never seen an object like this on a stereo photo." 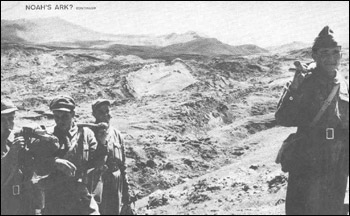 In 1960 the picture [above] was published in LIFE magazine under the heading of Noahs Ark? That same year a group of Americans accompanied Capt. Durupinar to the site for a day and a half. They were expecting to find artifacts on the surface or something that would be unquestionably related to a ship of some kind. They did some digging in the area but found nothing conclusive and announced to the anxiously waiting world that it appeared to be a natural formation.

Most of the global media turned away from the find and it became a non-story.

In 1977 Ron Wyatt visited the site. Obtaining official permission, Ron and others conducted more thorough research over a period of several years. They used metal detection surveys, subsurface radar scans, and chemical analysis -- real science -- and their findings were startling. The evidence was undeniable. This was the Ark of Noah.

The first part of the survey was to examine the object and take its measurements. The shape looked like hull of a ship. One end was pointed as you would expect from bow [below: D] and the opposite end was blunt like a stern. The distance from bow to stern was 515 feet, or exactly 300 Egyptian cubits. The average width was 50 cubits. These were the exact measurements mentioned in the Bible. 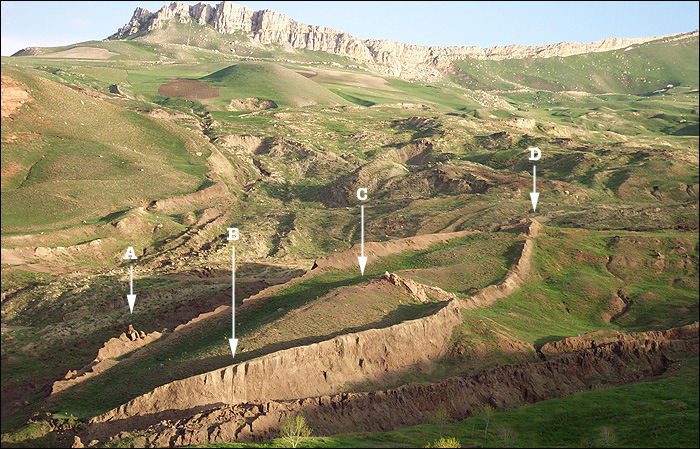 On the starboard side (right) near the stern there were four vertical bulges protruding from the mud [B], at regular intervals, that were determined to be the "ribs" of the hull [see below]. Opposite to these, on the port side, a single rib [A] protrudes from the mud. You can see its curved shape very clearly. Surrounding it are more ribs, still largely buried in the mud, but visible upon close examination.

Remember that this object, if it is the Ark, is extremely old. The wood has been petrified. Organic matter has been replaced by minerals from the earth. Only the shapes and traces of the original wood remain. Perhaps this is why the expedition in 1960 was disappointed. They anticipated finding and retrieving chucks of wood, long since eroded.

From the position of the object in the middle of an obvious mudflow, it is obvious that the object slid down more than a mile from its original location. Geologists believe it was originally over 1000 feet higher in the mountain and encased in a shell of hardened mud. They think that an earthquake in 1948 cracked the mud shell and revealed the structure. This is confirmed by stories from the surrounding vallagers who tell of its "sudden appearance" around that time.

Biblical accounts of the Ark describe it as having as many as six levels. The assumed shape of the Ark seems consistent with the bulge [C] in the middle of the object. In fact, as we will soon learn, radar scans of the structure suggest that this bulge is the collapsed debris of these levels.

Although most people think of the Ark as being rectangular, that only applies to the top decks. The sleek shape of the hull is necessary to enable the huge ship to remain stable in the water and survive tremendous waves.

According to some sites this is the direction of the flow down the mountain. So I made up a image from google earth showing the direction this may have taken. This mountain is called "Walls of Heaven". The landing point at the top has had some significant ancient evidence found. (If you have more information about the original landing site, before it's current day resting place, feel free to comment at the bottom)

The human eye needs to see reflected light to recognize an object. To visualize what remains below the earth, scientists use microwaves which can penetrate the ground and bounce back when they hit something solid. This technique is commonly used to locate oil and other minerals. Called Ground Penetrating Radar (GPR), the apparatus us made from an antenna that transmits, then listens to receive the "echo" and prints the result on a piece of paper. The delay and strength of this echo tell the geologists how solid and at what depth the objects are under the earth.

The team of geologists didn't scan the entire object. Instead, they marked out lines that crossed the object with yellow tape. Then they dragged the antenna (about the size of a lawnmower) over the lines and watched the output on the paper recorder. When they got a strong "hit" -- meaning there was something solid underneath -- they would record the position on the tape [above]. Later, when they made a map of the object, the tape and the location of the "hits" they realized that there was indeed a structure underneath the mud.

"This data does not represent natural geology. These are man made structures. These reflections are appearing too periodic... too periodic to be random in that type of natural pace." -- Ron Wyatt of SIR Imaging team

The radar cans revealed this structure [above] under the mud. The symmetry and logical placement of these objects shows that this is unmistakably a man made structure, most likely the Ark of Noah.

#3 -- Artifacts retrieved from the Ark

Using the GPR, Ron Wyatt discovered an open cavity on the starboard side. He used an improvised drill to make core sample inside this cavity and retrieved several very interesting objects. Below you can see the artifacts which were sent for laboratory analysis. On the left is the bore hole [see below], followed by what turned out to be petrified animal dung, then a petrified antler and lastly a piece of cat hair.

Even more amazing artifacts were found

Perhaps the most significant find from the Ark itself is a piece of petrified wood. When this was first found it appeared to be a large beam. But upon closer examination it is actually three pieces of plank that have been laminated together with some kind of organic glue! This is the same technology used in modern plywood. Lamination makes the total strength of the wood much greater than the combined strength of the pieces. This suggests a knowledge of construction far beyond anything we knew existed in the ancient world.

Tests by Galbraith Labs in Knoxville, Tennessee, showed the sample to contain over 0.7% organic carbon, consistent with fossilized wood. The specimen was once living matter.

Examination reveals the glue oozed from the layers. The outside of the wood appears to have been coated with bitumen.

Even more surprising were laboratory analyses which not only revealed that the petrified wood contained carbon (proving it was once wood) but there were iron nails [above right] embedded in the wood!

In Genesis 6:14, God told Noah to "make yourself an ark of gopher wood."
"Gopher wood" is a misreading and scribal error. "Kopher" wood is correct and means wood (any wood) that is covered with Kopher. Kopher is bitumen. In the Genesis text (6:14), the context is clear. The GPR wood used, (a scribal error) is to be covered in KPR. G and K in Hebrew are so similar that inexperienced Hebrew "scholars," such as those translating the King James Version of the Bible, could have been prone to such errors, indeed, they made many such errors.

gpr = "g," as in gopher, k pr = "k,"as in kopher Pictured right is a simple visual comparison of the letters.

We like to imagine that humanity evolved in a neat sequence of eras, each named after the technology that was discovered. We have the Stone Age (where man developed arrows and stone tools), the Bronze Age (where metals were combined and heated to make tools and household items) and lastly the Iron Age (where iron and steel objects were made by heating iron ore and adding other material -- like charcoal -- to strengthen it). The Iron Age is usually placed at 1200-1000 BC, yet we have iron nails being used in this extremely old construction

The most surprising find was discovered with sensitive metal detectors. The team located several strong "hits" that, when dug up, revealed large disc shaped rivets. From simple observation of the metal it was possible to see where the rivet had been hammered after being inserted through a hole [below].

If rivets being used in ancient construction doesn't impress you, this surely will.

An analysis of the metal used to make the rivets revealed that they were a combination of iron (8.38%), aluminum (8.35%) and titanium (1.59%). Remember these trace metals have survived petrification and so do not indicate the exact content in the original material. (see Report from Galbraith Labs)

We know the aluminum was incorporated in the metallic mixture because it does not exist in metallic form in nature. This implies an extremely advanced knowledge of metallurgy and engineering. Characteristics of an iron-aluminum alloy have been investigated in The Russian Chemical Bulletin (2005) and reveal that this alloy forms a thin film of aluminum oxide which protects the material from rust and corrosion. The addition of titanium would provide added strength. This seems to have worked. The rivets have survived from antiquity!