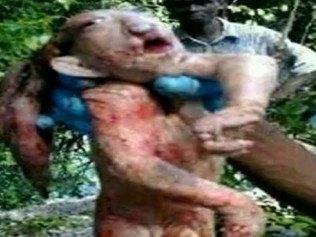 NAMIBIAN media report a strange muppet-like beast has been shot dead after a group stumbled across several of the creatures in dense jungle.

Locals came across the bizarre being while they were escorting a shooting party in Namibia, local media reported.

Witness’s state that the creature was spotted apparently foraging for food, one of the shooting party wounded it with his rifle and it escaped into the thick brush.

The locals tracked it to a nearby lair or nest where they found three more creatures of similar size.

The wounded creature attacked one of the shooting party and it was shot dead, the others escaped into the brush

The body of the creature was taken back to the local camp, police later removed its corpse and a full forensics investigation is under way.