Police in Pembroke, Ont., are investigating a bizarre case of a man who allegedly attacked a dog on a downtown street early Wednesday morning.

The man, who is in his 20s, was apprehended under the Mental Health Act, and taken to hospital.

Tanner Comeau, 18, a witness, was driving home to Petawawa through downtown Pembroke at about 12:30 a.m. ET with a friend when he saw something strange at the intersection of Pembroke Street West and Christie Street.

“We drove by it, and it was in the middle of the intersection. It was a guy wrapped around a dog, choking it, biting it. It was messed up,” Comeau told the CBC’s Kristy Nease by phone from Petawawa on Thursday morning. “So we pulled over. And the guy was in his boxers.

“We ran up to him, screaming at him. Our first priority was to go and hit him … but then we decided to call the cops because he was eating the dog, and there was blood all over the place and the dog was squealing. It was just really, really disturbing.”

Comeau’s friend, who was driving, called 911, and the two young men started screaming at the man attacking the dog. Comeau said the noise alerted people nearby, and a crowd of about 10 to 15 people showed up.

“There was a big circle of all of us yelling at him … and the dog finally got free,” Comeau said.

Comeau said the man started running after the dog, but a neighbour had already taken it inside.

By that point, Comeau said police sirens and lights could be heard.

The man ran down a hill with his hands in the air, screaming, Comeau said.

Police gave chase to apprehend the man, said Pembroke police Const. Dillon Gerundin, who could not say if the man suffered any injuries.

The officer said he was aware that a rumour was circulating in the community on social media that the man may have been high on drugs known as bath salts.


Police haven’t been able to rule out drugs as a factor, but Gerundin said there “is no evidence to suggest that bath salts are involved.” 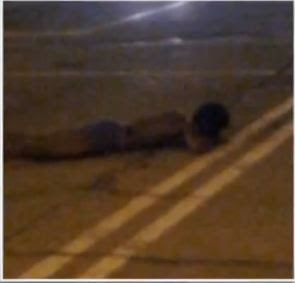